From Reluctance to Relief 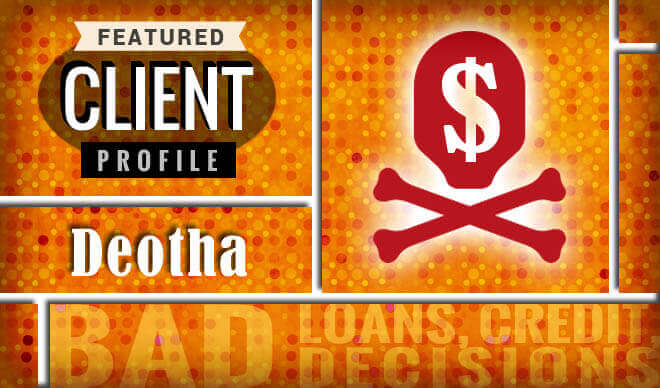 Overcoming fear of the unknown to enroll in credit counseling.

People are often nervous about using a credit counseling service and enrolling in a debt management program for all sorts of reasons. They may not have heard about credit counseling prior to a period of financial distress, so there’s fear of the unknown. There’s also uncertainty because there are absolutely companies out there offering services that are either scams or are not as good as a service representative will claim. These can lead to credit damage or in some cases, make a situation with debt worse than when the borrower started.

With all of those fears and concerns, it’s no wonder people can be hesitant to even call for a free consultation with a credit counselor, let alone sign up for a debt management program. However, when people overcome that fear they can find the relief they really need. This is Deotha’s story…

Deotha was reluctant to try, after being burned once before…

“I saw a commercial for Consolidated Credit on TV but I was reluctant to call at first. I had been caught up in something similar before that had ended up making my situation worse. So I knew I needed help, but I was worried I might be getting into something like that again.”

Deotha didn’t call that day or even the next, but she kept it in mind and continued to consider her options. In the end, it came down to the fact that she knew she wouldn’t be able to eliminate her debt on her own so she decided she had nothing to lose by calling just to check it out.

“I knew I had all those bills and I wanted to get them paid off, so I decided to give it a try hoping that it wasn’t a scam, you know. Once I talked to the counselor, it seemed like it was better than what I could do on my own so I made the decision to sign up.”

As her balances started to fall, she knew she’d made the right choice…

Deotha worked out her budget and the monthly payments for her debt management program with her credit counselor before the end of that first counseling session. She had $24,008 of credit card debt to eliminate, consolidated from three credit cards. The plan Deotha developed with her counselor had her completely out of debt in just 3 years.  She signed the paperwork to get started and Consolidated Credit started to work with her creditors to negotiate lower interest rates. Her rates were reduced to less than 8%.

“As soon as I saw that my balances were going down and this was actually paying off my debts I felt much better – relieved. I felt good about the decision that I made. I didn’t have any problems and now I’m three payments away from being debt free.”

Deotha has a goal now for the money she’s saving…

Now that she’s so close to the end of her journey out of debt, Deotha doesn’t plan to go out and drop any serious cash to celebrate. Instead, she’s just thankful that her debt is gone so she can move on to bigger and better things.

“I’m just happy it’s over. I need a new car so I’ll be using the money that I’m saving to make a nice little down payment and then I’ll have enough after that to make the monthly payments without struggling. It’s a nice feeling.”