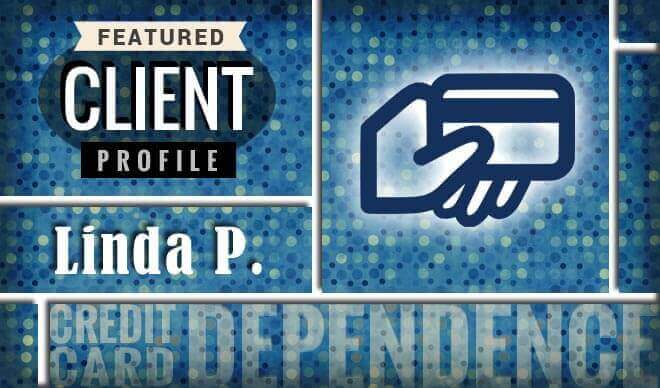 How to break a credit habit and learn to live without credit cards.

Credit dependence can be a tough habit to break. Once you grow accustomed to pulling out plastic it can be hard to go back. But credit dependence is rarely good for your budget. And breaking the habit is essential once that reliance turns into problems with debt.

When Linda came to Consolidated Credit, she admits she used credit cards to purchase almost everything she bought. With our help, she was able to break the addiction while eliminating the $17,000 tab she’d already generated.

A habit becomes a hindrance…

“I’d like to be able to blame this situation on some catastrophe or major event, but I can’t even recall exactly what I bought to end up with $17,000 in debt. I just bought everything on credit because I could.”

It’s a common problem with credit use. Credit cards offer convenience, often along with the added incentive that you can earn rewards for spending. Using credit becomes a habit that leads to high levels of debt. It’s only when the cardholder realizes that they’re struggling to keep up with the payments that the problem really becomes apparent.

“It’s scary and frustrating at the same time. My interest rates were in the 20’s so my debt just kept accumulating. I made payments month after month but I never saw an improvement.”

While driving in her car one day, Linda heard a commercial for Consolidated Credit. The promise of finally achieving freedom from debt led her to pick up the phone. It sounded exactly like the lifeline she needed.

“It felt good! Once my interest rates were brought down I started seeing a difference in the payments. Then the principals started to go down and I knew I’d made the right choice.”

That’s not to say that Linda didn’t feel a little reluctance at first. When she heard that her credit cards would be frozen, she worried she wouldn’t be able to make her budget work.

“When I was told that I would have to give my credit cards up, I was reluctant and worried. I really thought that would be impossible. But my counselor and I worked out a budget and everything fell into place.”

As her balances have disappeared, Linda has taken advantage of Consolidated Credit’s free financial resources to learn better habits. She’s focused on learning how to use credit in a financially healthy way and how to budget so she doesn’t have to rely on her cards.

“I’ve learned that the main goal of credit cards is to build credit, not to purchase everything in life. That’s not how it works. I’ve also learned to save up for things and for them with cash.”

Once Linda completes the program, her credit card accounts will be restored. However, she has no intention of letting things slide again.

“In the event that I use credit cards, I will pay off the debt as soon as I can. I’d rather wait to buy something and have no debt, than charge something so I can have it now.”

Linda encourages anyone sitting on the fence to call…

“Just do it. People think their credit will be sabotaged, but it’s not like that. My credit has improved because I’m paying off my debt. You set a goal for when your payments will be made, you make the payments and your debt gets paid off. It works.”