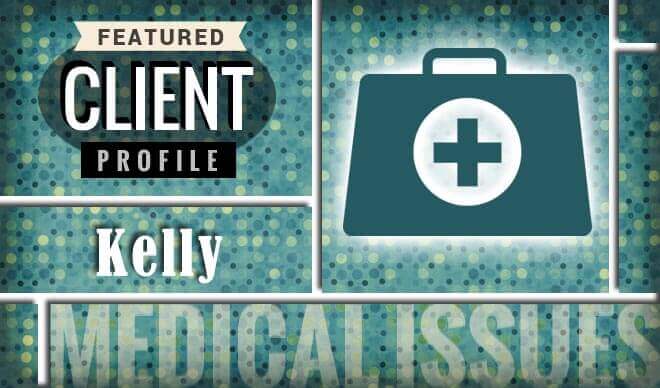 What to do when special needs childcare leads to debt problems.

Seven years ago, Kelly wouldn’t have dreamt she’d be making her own laundry soap or living without cable, planting a garden or blending her own baby food. But when her third son Nate was born with unexpected special needs due to complications, Kelly was forced to leave the workforce to care for her son full-time.

Kelly and her husband called Consolidated Credit for help. And by the time her fourth son came along, it really gave birth to Kelly’s cost-cutting lifestyle!

This wasn’t the first time they reached out help…

Like many young adults, Kelly and her husband hadn’t exactly been responsible with credit while they were in college.

“My husband had to rely on credit just to get through school. Then when we got together we sometimes used credit as a crutch. Some of it was just stupid spending because we were young and didn’t know any better, like putting regular bills on credit cards just to get points and cash back.”

So they called Consolidated Credit to set up a debt management program. With their credit counselor’s help, they were able to get on the right financial path.

“We got all of the debt cleared away and decided we were going to make some changes. With a better understanding of our finances, we even adjusted to a 15-year mortgage so we could get our house paid off sooner. Things were going really well and we were on track.”

Then a special delivery brought on special needs and care…

As they eagerly awaited the arrival of their third son, Kelly and her husband couldn’t imagine what was about to happen and how significantly their life would change.

“My third son Nate was born with pretty significant special needs. At first we didn’t even know if he’d live, but then thankfully we were able to bring him home. But he needed hospice and in-home nursing. We had all these machines running, the lights were always on. Our electric bill went through the roof and so did our water bill.”

The utility bill increases weren’t the only financial shock they had to absorb. Costs just kept mounting and they were barely staying afloat on a shoestring budget.

“Nate needed a lot of medical appointments and therapy visits. When he turned 3 he was able to get his trach out and the nurses left. But after my lost wages and all of the expenses we incurred, we’d accumulated $66,000 in debt in just that 3-year period.”

The stress began to take its toll…

At the time, Kelly was still trying to continue her career as a social worker. But the stress of trying to take care of a special needs son, the rest of her family and her demanding job began to take a psychological and financial toll.

“Sometimes I’d have to be at the hospital for my son and at the courthouse for a case at the same time. It was like a constant whirlwind. I had things that I had to do at work, but I couldn’t keep up with them and give Nate the care he needed. I had to quit my job.”

Unfortunately, that meant the loss of her $40,000 annual income. Their tight budget became downright unmanageable on her husband’s single salary. To make matters worse they didn’t qualify for assistance.

“My son didn’t qualify for Social Security. So if there was something he needed that wasn’t covered by insurance, we had to put that on credit, too. The bills just kept piling up bit by bit and we were barely getting by with everything we needed to manage his health.”

Kelly’s son beats the odds and becomes her inspiration…

Although his prognosis had been slim and he wasn’t expected to live beyond two weeks out of the hospital, Nate beat all of the odds to become the happy, healthy child that could play with his brothers. He’s 7 now and still doing well.

Unfortunately by the time things turned around with Nate, their finances were on life support. But Kelly found inspiration in the resilience she’d witnessed in her son.

“I was keeping track of the bills and saw how bad things were getting. I didn’t want to worry my husband, but I knew we needed to sit down and really make a plan. We laid it all out and thankfully even though we were barely hanging on, nothing was past due or late yet.”

Kelly and her husband knew they needed to turn things around quickly in order to avoid a complete financial meltdown.

“We wanted a plan where we could get the debt paid off, not one where things would be written off or cut. We’d used the money and we’d spent it, so we wanted to pay it back fair and square.”

They called the same company that had helped years ago…

“I felt like an idiot calling back, because we’d already done this once and we’d promised ourselves we’d never be in this position again. I knew it wasn’t our fault because we couldn’t have anticipated what would happen, but I still felt the way I did. So I kept putting it off until my husband said, “We’ve got to do something.” – I finally swallowed my pride and called.”

Kelly just hoped that Consolidated Credit could actually help them like they had before. But this time they had more debt and more challenges with limited income and 3 kids.

“The counselor was really, really nice and in spite of my fears and embarrassment, she didn’t make me feel stupid at all. Before I called we were feeling pretty desperate and wondering if we needed to take drastic action, like selling the house and moving or getting another job on top of caring for Nate and our other the kids.”

Thankfully, none of that was necessary once Kelly set up a new debt management program with the counselor. They consolidate her credit card debt and the counseling team went to work to negotiate with her creditors for lower interest rates.

Nate gets a little brother…

While they were paying off their debt on the debt management program, Kelly gave birth to her fourth child. She knew it would be tough and might take some sacrifices, but Kelly and her husband were ready to do whatever was necessary to meet those challenges head-on.

“When the fourth baby came along, we used hand-me-downs. We dropped our garbage services and started burning our trash. We cut the cable, we changed cell phone plans, we planted a garden, we made our own baby food and used cloth diapers instead of disposables. We never bought formula; he breast fed the whole time.”

With all of those adjustments, Kelly and her husband didn’t have to deviate from their debt elimination plan. They stayed on track in spite of the extra mouth to feed. They also made some extra financial adjustments just to ensure they could maintain control.

“We had to put some of our college loans in deferment so it didn’t affect our credit. My husband temporarily stopped contributions to his 401(k). And we stuck strictly to our budget. I even checked out our insurance to make sure that babies are covered on my husband’s plan so immunizations and such wouldn’t come out-of-pocket. We had a plan and we were sticking to it.”

Kelly continued to look for new ways to cut costs and save her family money. As a full-time mom, she had time to opt for many do-it-yourself household solutions that allowed her to save a few dollars each here and there.

“Everything was accounted for and we had $75 extra every week to cover miscellaneous expenses. It was encouraging to see that as time went on the program was really working. For every month we were in the program, our debts were getting smaller and smaller. And honestly, living more simply and decluttering ourselves of stuff and bills and responsibilities was freeing, too. Once we made the changes, we realized how much money we’d been wasting.”

Now Kelly and her husband are just one payment away from completing their debt management program to get to zero credit card debt. Kelly breathes a big sigh of relief.

“I can’t wait. We know we could have been paying off that stuff for the rest of our lives if we hadn’t used the program and now this month we’ll be debt free.”

Even better, their financial situation has actually improved as a result of completing the program.

“Before enrolling, my credit score was in the 600’s. It wasn’t horrible because we weren’t missing payments, but it wasn’t good either because we had a lot of debt. Right now my credit is around 785.”

With their DMP program graduation so close, Kelly and her husband already know what they will do with the $1,358 per month that will be freed up.

“First we plan on doubling our college loan repayment to catch up, and resume the contributions to our 401(k). Then we’ll start building our emergency fund in case there are any more rainy days down the road.”

And now that they have this streamlined, DIY lifestyle they don’t plan to go back.

“We’ll keep this lifestyle up. The food is so much healthier; it has no chemicals so we’ve gotten healthier during all of this. We have an antenna on our roof and just got Netflix for $8 a month. My kids play outside now instead of watching 200 channels of nothing but garbage. I don’t want any of that to change back to the way it was.”

Kelly has some advice for others in similar situations…

“Don’t be embarrassed to ask for help. Things happen. Everybody struggles with something, but waiting and putting it off just gets you further in the hole. Handle the situation as soon as you can. Get a plan and stick with it. It’s worth it in the end. I am so thankful for the debt management program because we never would have been able to do this on our own.”

“He’s seven now and is doing well. When he was a month old and we took him home they told us we’d only have him for about two weeks. He absolutely beat those odds. He has special needs still, but it’s completely irrelevant because we thought we wouldn’t have him at all. He’s going to school and learning, he’s happy and very affectionate. He’s a great kid and definitely worth any amount of debt it took to get him to where he is now.”

That kind of inspiration makes it easy to put in the work it takes to stay on the right financial path that they found.

“For the first time in 15 years we truly have a budget and we’re sticking to it. My husband has an Excel spreadsheet and he enters everything we do into it. We know where every penny is going now. It’s not easy and it’s not exactly fun sticking to the budget, but it’s crucial. The reward in the end makes it all worth it.”