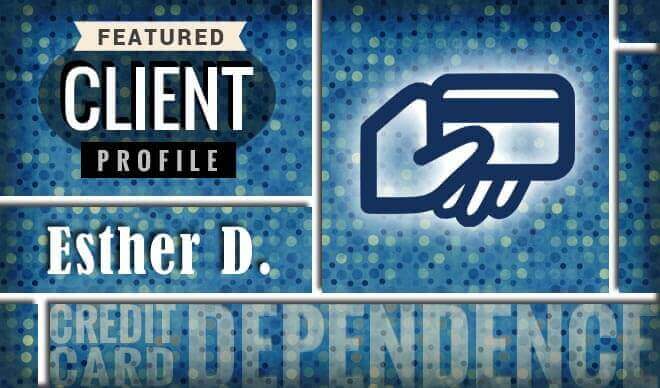 How second-hand clothes led to $32,000 in credit card debt

When Esther was a child, she loved the first day of school – because it was the only time she got to wear new clothes. As the fifth of eight children, Esther wore hand-me-downs every other days of the year. But because her school required uniforms, she looked forward to the start of the school year.

When she grew up, Esther became an insurance underwriter. She never did get over those second-hand outfits, however.

“I think my biggest problem as an adult is that I always wanted to have new stuff,” she says. “As a kid, I was always given the hand-me-downs, and I hated it.”

As an adult, she bought so many new clothes that she ended up with more than $30,000 in credit card debt. She tried to pay it down on her own but couldn’t.  Then she called Consolidated Credit for help.

“What was I thinking?” she questions. “Sometimes, I buy the stuff and I don’t even wear them. It was just something to satisfy that need, that urge. Often times, you don’t realize how money adds up. You buy one thing for $30, and you end up buying two or three – it adds up. I could’ve gone to the mall at 9 a.m. and don’t leave until 9 p.m. at night. I could go through the racks all day just to buy something – clothes, shoes, bags – it wasn’t on any big items.”

It eventually caught up with her…

“I started living from paycheck to paycheck, which I never did before,” she says. “I called some of the companies and tried to negotiate a lower interest rate, but they would not do it. I felt like I was drowning.”

She needed help – and found it through a friend…

“A friend of mine had recently paid off their debt through Consolidated Credit. They saw the results and said every month they saw the progress. So, I decided the best thing to do is call Consolidated to see what they can do for me,” she says.

“When I was told what my monthly payments would be, I wondered if I could do it even though it was 50 percent less than what I was paying on my own. Since being on the debt management program, I haven’t missed a payment, and my balance is going down month after month. It’s been such a great help, and I’m so excited that I’m close to finishing.”

Esther was skeptical at first…

“I thought I would never get out of debt. I wasn’t expecting my credit score to be what it is now. When I started, it was in the low 500’s and it’s now around 713,” she rejoices. “I should’ve called Consolidated Credit a long time ago.”

What has she learned?

“I’ve learned how to better manage my bills and take into consideration what the interest rates are. I won’t enter blindly anymore,” she says. “A lot of the times, we get credit cards but we don’t factor in what the interest is going to be. I never thought of interest until I was in the mess that I was in.”

Now Esther is telling her friends about Consolidated Credit…

“I always give people the number to call,” she says. “I never thought I would pay off this debt but it’s helped me tremendously. I now realize, ‘Wow I should’ve called a long time ago.’ To anyone in debt I say, ‘Join the debt management program, especially if it’s in the program that I am in right now. Don’t be afraid and see how it works for you.’ I’m a true example that it works.”

“Well, I’m not going shopping,” she says with a chuckle. “I just have to not do it anymore. Thirty grand, and what do I have to show for it? Nothing! And that’s the problem.”

When Esther tried to negotiate the interest rates with her creditors on her own, they wouldn’t budge. Realizing she needed help, Esther went to a reputable financial company to negotiate on her behalf. In less than four years, Esther will be debt free. If your interest rates are too high, and if more than half of your monthly payments pay interest and not principal, it’s time to seek help. Dial 1-888-294-3130 to speak with a certified credit counselor. Or, request a Free Debt Analysis online.