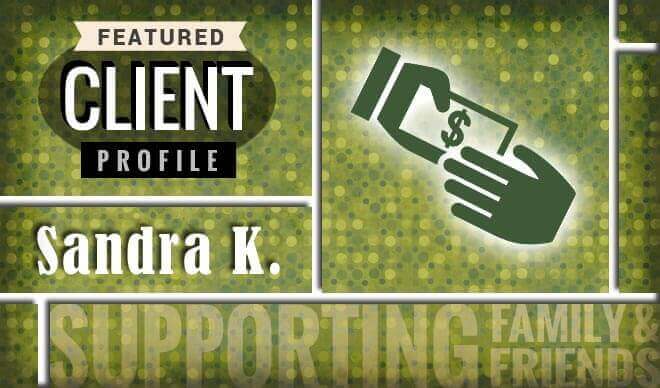 Her grandchildren led to grand debts.

When Sandra’s two grandsons and granddaughter were young, she could buy them cheap toys and still get hugs and kisses. Now that they’re teenagers, their tastes are more expensive so seeing their smiles tends to be pricey.

This eagerness to give her grandchildren the world is what drove Sandra into $13,000 of credit card debt.

Three years ago, Sandra saw a Consolidated Credit TV commercial and called the number on the screen. Today, she’s three months away from becoming debt-free.

“I had gotten myself into more than I could handle. I’m usually smarter but before I knew it, it was way up there,” she says. “I couldn’t go out and buy the little things that I bought before because they’re now too big and want other things.  I took advantage of every pre-approved account, and next thing I know, I didn’t have enough room in my wallet to put the credit cards.”

Sandra’s scenario sounds similar to the problem Carlos E.  was having when he called Consolidated Credit for help – easy access to credit and taking advantage of them.

“I don’t remember exactly what I was spending on, and I don’t even want to go back to those days,” she says. “What I do remember is that I was constantly robbing Peter to pay for Paul. And then one day, all my accounts ended up falling behind.”

Consolidated Credit put an end to the cycle…

“I had called other companies, and the last company wanted almost $200 more than what I was already paying a month,” she says. “So I called Consolidated Credit. They told me what my payments would be, and I set it up.”

“After finding out that it would be cheaper to go with Consolidated, I felt great because it was saving me quite a bit of money,” she says. “It was still tight, but as I got some accounts paid off, I added a couple more dollars to the monthly payments. I’ll be making my last payment in November, and I’m feeling really good. It will still be tight for the next couple of months, but the end is in sight. As Consolidated tells me what accounts have been paid off, I cut up the cards.”

The debt management program taught her a valuable lesson…

“To be very careful – to stop and read the fine print as to what the interest rate is going to be because the interest rates on some of these cards were absolutely ridiculous. I don’t know how they get away with it.”

“Unfortunately, before Consolidated Credit, what I paid every month was worth just the interest,” she remembers. “Some of the interest rates were as high as 33 percent. Some went down to 10 percent, especially the department store cards. With a $100 payment for example, $25 would go towards the principal and $75 towards the interest.”

It is a problem Consolidated Credit’s alums Linda P. and Esther D. can attest to. Juggling numerous credit cards and making payments that went towards the interest and hardly the principal. This is a surefire way to remain in debt longer. Consolidated Credit helped them regain control.

Sandra refuses to perpetuate the cycle…

“I use my debit card more often now and if I don’t have the money I just don’t get it.”

She does not want others to fall in the trap like she did. Please pass this on she says…

“Don’t accept every pre-approved credit card offer that comes through.”

Easy access to credit can be a curse and a blessing

It’s one thing to have numerous lines of credit and another to be using all of them. You’ve also probably heard that opening too many lines of credit can hurt your credit rating, and keeping up with too many credit card payments can drive you insane.

If credit card debt is overwhelming you and juggling payments and high interests fits your current situation, it’s probably time to make the call. Consolidated Credit can help lower your interest rates by 30 to 50 percent and make the monthly payments on your behalf.