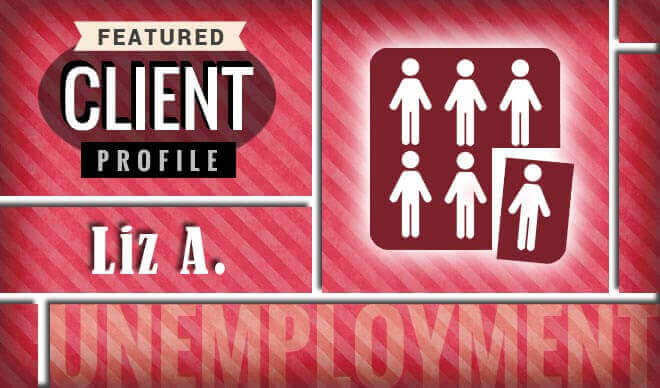 Five years ago, Liz couldn’t afford to buy a new shirt without using credit. This summer, she’s paying for an anniversary cruise to Alaska – in cash.

Liz and her husband ran up $50,000 in credit card debt, but not on luxuries like vacations. They used 11 credit cards to cover everyday expenses and emergencies ranging from doctor bills to car repairs – especially after being hit by a drunk driver.

When the recession hit a few years ago, it didn’t spare the church where Liz and her husband worked. They were both laid off. Liz became an administrative assistant in the healthcare field, but her husband wasn’t so lucky. He had to take a job that paid $9 an hour less than what he was making before. Today he works in the grocery business, where he makes more money per hour but the hours are fewer. Through it all, the bills kept coming and they all had to get paid.

“For a while, my husband and I were both working for a non-profit that didn’t pay very much at all, and we didn’t have raises for years and years. Our daughters got older and started college, the oldest started driving and we had to help them out. During that period my husband also went through a couple of layoffs,” she says. “It was just one thing after another, so we basically used our credit cards to cover expenses and emergencies like car repairs, tires, and doctor bills.”

Desperate and overwhelmed, Liz took to the Internet to find ways and ideas to pay off her debt. Her search yielded numerous results; among them Consolidated Credit.

“I talked to a couple debt-settlement companies. I didn’t understand how they worked – it just didn’t seem like something we were interested in doing,” she says. “Then I called Consolidated Credit. A representative explained the debt management program in great detail. It sounded too good to be true so I waited to talk to my husband about it, and my friend Leslie. The three of us just kept on laughing and saying, ‘There has to be a catch.’”

“But we checked online and found Consolidated Credit has an A+ rating with the Better Business Bureau.”

Liz and her friend Leslie, who also had $76,000 in credit card debt, joined the program.

At first, Liz was leery, not only about the legitimacy of the program but living without credit cards…

“The debt management program requires that you give up the cards. How are we going to live without them?” she questioned. “From store cards to bank cards to gas cards, we depended on them for years to extend our income.”

Then Liz rationalized and realized…

“The credit cards were maxed out anyway. I was so tired of paying down a little, getting $100 free on them and then using the card again for something. ‘This is not a way to live, I’m never going to get free from them, and we’ll go into retirement with all this credit card debt,” she reasoned. “It was a now or never kind of thing. We needed to do this.”

Before Consolidated Credit she tried paying on her own…

“We tried not using our cards – we put them away, but we weren’t making any headway paying them on our own,” she says. “The interest was so high that the principal barely budged. A $180 payment would reduce the principal by only $15 or $20 and the rest would go to interests. We were really at the end of the stairwell of options. We didn’t want to file for bankruptcy or debt settlement. Stumbling on to Consolidated Credit was the best thing that could’ve ever happened to us.”

“The fact that they were able to negotiate with the creditors and freed up $400 a month, gave us the encouragement to say, ‘OK, I won’t have that much going out, so maybe that will help and it certainly did. We needed that extra money. It put an end to us using credit cards to pay for gas and paying for the little things that came up.”

“In addition to reducing our monthly payments, some of our interest rates went down from 18 to 20 percent to 1 -2 percent and even zero percent,” she rejoiced. “There’s no way we could’ve paid off that much money in four and a half years on our own. It’s been such a relief not having to juggle credit card statements – it was always, “Oh my God, here’s another one, here’s another… Just to be free of that, is so liberating and empowering.”

“My credit score was around 600 before and it is now up to 750. We’ve bought a couple cars during this process with very good interest rates. I thought being on the program they would tell me:

“Sorry you’re not eligible or your interest rates will be super high but it wasn’t that way at all. In fact I was looking at refinancing my house and the guy asked, “Is there anything we need to know?” and I said, “Well we did this debt management program,” and he said, “That could hurt your credit.” I said I don’t think it has. When he contacted me he said, “You’re right it has not hurt your credit at all.”

“I’ve never seen any detriment come to us as a result of this program.”

“It’s easy to say live within your means, but doing so can be hard because things come up that you can’t control,” she says. “My husband and I just had some problems, some of that debt we probably could’ve controlled a lot better. Some of it we didn’t have that much control over, but moving forward we are not going to let credit cards be a part of our lives again where we say, ‘Oh that’s a cute shirt I’m just going to charge it and pay it when the bill comes. Often we don’t pay it back right away because something came up in the meantime.

“We’ve learned to say, nope we don’t need it, and we can wait a little bit or cut back in another area. We’ve learned how to adjust and live with what we have. We put a little aside and have been able to manage things as they come up. We now pay for regular things in cash.”

“After paying $50,000 in four and a half years, I think pretty much anything is possible. We can start preparing for retirement because honestly it’s not that many years away and we haven’t done a good job of preparing for it. We’re going to have to go into double time.”

“I’m so happy we did this and that we’re actually coming to the end of our program this month; it just amazes me,” she says. “I recommend that everyone at least talk to Consolidated Credit. In fact, I just shared our success with another friend whose daughter is having some debt issues and the daughter has actually signed on to the program. I honestly cannot think of any other possible option that could’ve worked for us.”

A freedom from debt celebration is on the horizon for Liz and her supporters, minus Consolidated Credit…

“We will be going to a nice dinner at a nice restaurant with Leslie and my other friends after my last payment in April,” she says. “Also, because we didn’t have money at the time, my husband and I will be going on an Alaskan cruise to celebrate our 40th wedding anniversary with our daughters and their husbands in August. We’ll use some of the money we no longer give to Consolidated Credit to pay off our cruise.”

Liz technically gets a raise …

“Having $1,200 going back into our living expenses is basically getting another paycheck every month,” she says. “In addition to that family cruise this summer, we’ll work on paying our second mortgage and car notes, and put some toward savings.”

Will she miss Consolidated Credit?

“In a way, but in others it’s a fun farewell and hopefully I won’t be back,” she chuckles. “I deeply appreciate everything Consolidated did for us. I honestly feel like we can go forward now and keep developing healthy financial habits.”

And now the million dollar question: Is there a catch?

“We determined that the catch is ‘living without credit cards’ because that’s really hard for some people. But it’s been such a relief to learn that I can live without credit cards. We’ve learned how to rethink and get creative with the way we spend money and do things. This is a great catch to have,” she hypothesized. “They’re honest and they do what they say they’re going to do. The truth is in the statements that we get every month showing our debt going down and is now one payment away from vanishing entirely.”

If you’re tired of trying to get out of the debt cycle on your own and instead of making headway, you’re actually digging your head deeper into the sand, call Consolidated Credit. Like Liz we can help you regain control. Our credit counselors are certified and are always willing to help. Dial now 1-888-294-3130 or request help by filling this online form.