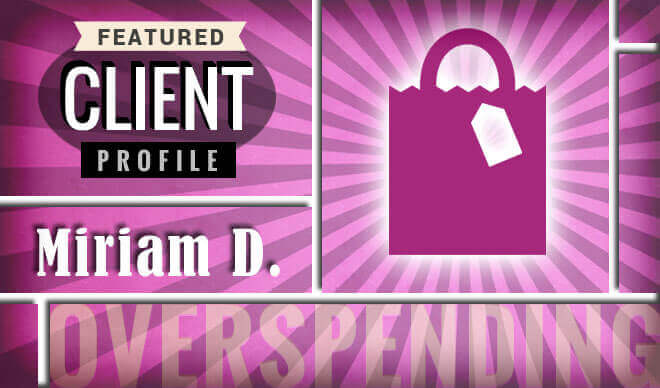 Miriam started spending in college and kept spending until the bills piled up.

Financial habits are often learned as we grow up and a bad financial habit can be hard to break once you get started. That was the situation that Miriam found herself in after picking up a credit card shopping habit while she studied to be a nurse in Illinois.

As bad financial habits go, credit card retail therapy can be one devastating on your budget – and also one of the toughest habits to break. It’s a common challenge that people, particularly young women, can fall into during college when most get our first credit card. Even though there are laws in place to protect students under age 21 from taking out credit cards they can’t afford, it leaves older students ripe for the picking by creditors looking to pick up customers.

Miriam got her first credit card in school which quickly led to getting several high-interest retail store cards. She never went crazy and maxed out her cards, but she never paid the debt in-full either. Major life events would come and take up the money she meant to use on debt elimination. She would start shopping again once life got back on track. It was a cycle that didn’t end until Miriam found Consolidated Credit…

Her shopping habit developed during college…

Miriam started using credit for the right reasons. She knew she needed to have good credit however her first card was like a gateway drug for her developing shopping addiction.

“I started collecting retail store cards when they offered specials like ‘get 30% off your purchase if you sign up for our card today.’ And I kept using those cards long after those special expired.”

“It was easy charging $400 for clothing and accessories. Spending made me happy, but making more than the minimum monthly payments became impossible. I just didn’t have the cash flow to match my monthly bills.”

Even after graduation it was one thing after another…

When Miriam graduated and started working as a nurse, she knew she needed to cut her debt and get out of the hole she’d dug. Stopping spending to eliminate the debt she’d accrued was easier said than done. “I’d try to cut back and curtail my spending, but then something like the holidays would happen. I would tend to get into the spirit of things and just freely charge gifts. I didn’t plan ahead and before I knew it I was paying off holiday shopping sprees for two years or more – especially when I only made the minimum payments.”

Having children meant something had to change…

When Miriam got married, her husband wasn’t unhappy about her shopping habit, because unfortunately he was a spender, too.  So while they didn’t fight over big credit card bills, they weren’t making a plan to get ahead of their debts either. Debt continued to accrue until they had their first child.

“I knew I had to change my ways. We had to get rid of our debt because there was no way we could raise a child while continuing our poor financial habits.

Miriam was definitely right about that. Consider that the average cost to raise child to the age of 18 – not including college tuition – is almost $250,000! It was time for some changes and Consolidated Credit helped Miriam facilitate the right changes to get her family where they really needed to be.

“Consolidated Credit helped me get my debt under control and also helped us learn how to stop overspending and relying on credit cards. They also dealt with our creditors so I didn’t have to go through the hassle.”

It took just 3 years to eliminate Miriam’s debt – some of which she’d had since college – using a debt management program. She and her husband have balanced their budget and learned to put the cards away until they really need them. As a result, their credit scores have improved and Miriam and her husband are confident they can finally qualify for a mortgage. They plan on buying their first home in spring of next year.