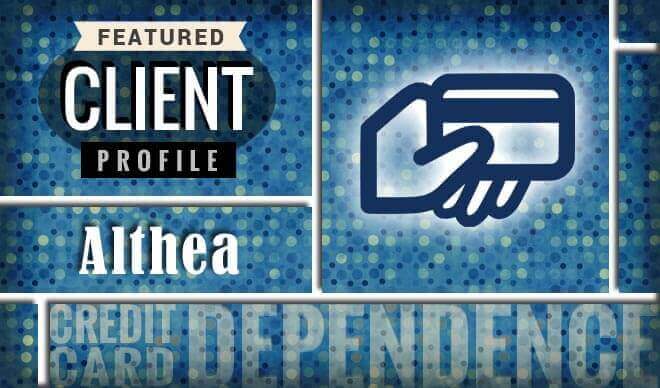 Incidental spending can add up to big debt problems with high interest charges.

These days, with reward credit cards offering things like cash back on every purchase, it’s easy to get into debt. You put charges on plastic because it’s easy, convenient and earns you points. Credit card companies send offers for new credit cards with 0% APR, so you keep spending. Suddenly, usually as those introductory periods end, you find yourself in a bind with debt.

This is exactly the situation that Althea faced when she came to Consolidated Credit. Burdened with over $20,000 in credit card debt at interest rates as high as 18%, Althea knew she needed help.

Most of Althea’s spending revolved around redecorating. When she needed to repair the floors in her home, Althea whipped out a credit card and headed to the home improvement store. Then when she wanted to incorporate some shells into a bathroom beautification project, she hit the dollar store. Again, even that small incidental purchase went on a credit card.

“It was just so much material foolishness. It was too many open lines of credit, too much unnecessary spending. Let me tell you how many times I’ve been to Home Depot. The trips were endless. And because you have the card when you go in there, you get more stuff than you need.”

Althea says it wasn’t the initial floor replacement project that sent her budget into a tailspin. She’d budgeted ahead for that.

“The single most expensive thing I did was renovate the living room and dining room floors. But the cost wasn’t really that much. It was everything else. I’d say, ‘Oh, I have a little bit of credit on this card, so let me use it instead of pulling out cash. Or I might go over to the dollar store to see what they have today. I can make it work. I used my credit cards to get whatever I wanted. As long as I didn’t have to take cash out of my pocket.”

At first, Althea didn’t have any problem keeping up with her credit card bills. Most of her credit cards in use had 0% APR introductory periods. This led Althea to get comfortable with her debt. She didn’t think it was an issue.

Then the introductory periods ended and Althea was in a bind:

“It’s amazing to me how these credit card companies sell you these cards because they have no interest for six months or a year. But if you don’t pay off the balance in-full within that period, you have to pay back all the interest. It happened to me on a few of my cards.”

It’s a trap that often catches consumers who aren’t experienced with credit. The 0% APR introductory period is beneficial because 100% of every payment you make eliminates the debt you incur. Your payment isn’t split between the principal and accrued interest charges.

However, when that introductory period ends, the standard “interest rate for purchases” goes into effect. Whatever balance you have at that time gets hit with high interest charges. For Althea, some of those charges were almost 20%.

“They told me no interest until a certain period. I wasn’t money-wise enough to understand what that meant. I just assumed I don’t have to pay interest on any purchase I made for a couple of years. I didn’t realize that if I didn’t pay it now, I would have to pay back the interest later. It caught me by surprise.”

Althea got stuck on the minimum payment treadmill…

“I was making at least the minimum payment on each of my cards, but most of it would go towards interest and not the principal. So really, I was just paying the interest charges every month and not making any progress.”

Here’s a breakdown of why minimum payments wouldn’t work:

After seeing a commercial for Consolidated Credit on TV, Althea decided enough was enough. She called for a free consultation and found the relief she needed.

A debt management program fit her budget and goals…

“My interest rates were too high – 16, 17, 18 percent. Consolidated Credit was able to lower my rates to a point where my payments now go toward the principal.”

Althea worked with a certified credit counselor to find a payment she could afford. She consolidated her debt in a debt management program and signed up that day. Things have been better for her budget ever since.

“I’m very pleased with the $400 payment that I make to Consolidated Credit to disburse to my creditors. Reducing my payments by around 20% put it in a financial range I could afford. If feels so good that the money goes towards the principal now and not interest.”

Althea is happy to see her balances fall…

“My balances are going down and that means progress. And it doesn’t take much effort on my part. I just have to make sure the money is in the bank when it’s time for Consolidated to take it out and that’s it. I don’t have to mail anybody or hide from collectors. Consolidated Credit takes care of it for me.”

As Althea works through her debt management program, she’s also learning better money habits through the free financial education resources that Consolidated Credit offers. Being enrolled in the program has shown Althea how to live without depending on credit to get by.

“Being on a debt management program has allowed me to have a little more cash in my pocket. So, I use cash more often now. I’m also a little more mindful of what I’m spending my money on. I’ve curtailed all the unnecessary spending. Now I know not to be ridiculous and say just because I have a few more dollars, let me go get this or that.”

And she has this to advice for others…

“Don’t open any accounts if you don’t need them. It seems like easy money, but it’s money you have to pay back with interest. And it’s money often used to make unnecessary purchases. For me, it was things that I didn’t really need… Just more material foolishness.”

Althea also encourages anyone who’s holding back from making the call. She says you have to get over the fear that almost everybody has to get to where you need to be.

“Fear is a hindrance and that’s in every aspect of life; we have to overcome that fear. For anyone looking to eliminate their debt who can’t do it on their own or they don’t have the discipline and need guidance, Consolidated Credit is the best avenue to get things under control. Don’t worry about the fear. Step out on faith. It worked for me.”

Graphic quote: The counselors and representatives are so knowledgeable and patient. No question it too hard or too stupid as it relates to your finances. I really appreciate that.

Now Althea saves her money for bigger and better things…

“I’d like to visit Africa. If I can’t make it there, perhaps just somewhere outside the U.S. I never had money to travel before. So, that could be something I do with my newfound freedom.  Put a few dollars aside and eventually treat myself. Whatever I do, I’m not getting into debt again.”