Credit Counseling Can Teach You How to Stop Using Credit Cards 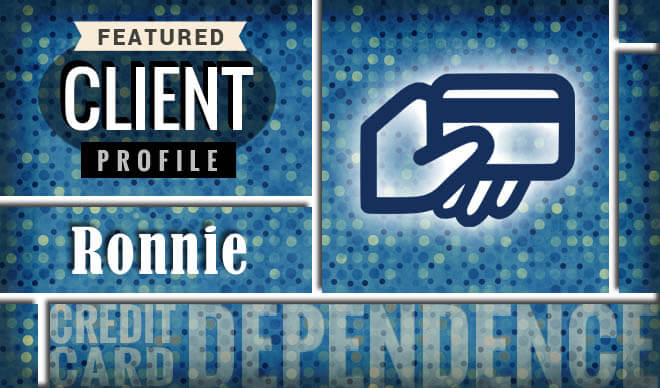 Ronnie pays off $50,000 in credit card debt and swears off credit cards.

Seventy-two percent of Americans use credit cards and Ronnie P. used to be among them. He liked the advantages his cards offered, along with the ease and convenience of swiping; until one day Ronnie realized all the swiping had ballooned to over $40,000 in initial credit card debt.

Credit cards can be a useful tool. However, they also allow you to build debt in a way that can be unhealthy for your finances. High interest rates eat up minimum payments, meaning you only decrease your balances slowly. At the same time, you keep charging.

So, those high interest rate balances slowly climb even though you make payments every month. Then, it hits you one day how much you owe. That’s what happened to Ronnie:

“You realize belatedly that it came on slowly – sort of piece meal. But suddenly one day, like an epiphany, it dawns on you how much trouble you’re in.” 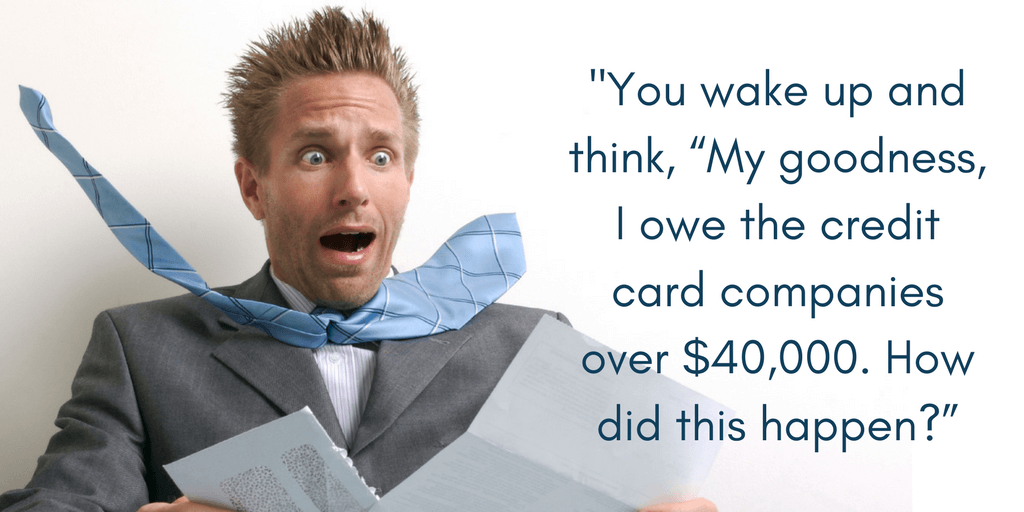 “And then you think back and you realize it was this, this and this. In our case, it was mostly home renovations.”

Ronnie diligently made at least the minimum payments on time each month to remain in good standing and avoid penalties. Still, despite making consistent payments, the principal on Ronnie’s debt barely budged.

He did research to find a better way out of debt…

Ronnie says extensive reading taught him a few lessons about why he couldn’t pay off his debt effectively just paying the minimum due or even just a little more each month.

“The credit card companies are happy to just rock along that way. As long as you’re making payments – even if it’s the minimum or whatever – that’s okay for them. But I couldn’t go on that way.”

Ronnie determined his high interest rates would keep him in debt longer than he cared to be. He also knew those rates were the reason his balance never seemed to go down. So, Ronnie took a good first step and called his creditors to negotiate lower interest rates and work out a repayment plan.

“I had some success on my own calling Chase; it went pretty well. They froze the account and dropped our interest rate to 0 percent.”

The challenge is that different creditors have different policies about working with customers to pay off their debt. It also depends on your history with them.  If you use the account frequently and you always pay on time they may be more willing to help you. In this case, Chase worked out a customized repayment plan with Ronnie. However…

“I tried to negotiate with another creditor, but they were only willing to lower my interest rate to 15%.”

An ad with a possible solution caught Ronnie’s attention…

One summer day in 2013, a Consolidated Credit ad caught Ronnie’s attention – in particular, a claim to lower interest rates. He picked up the phone and made the call.

He called and spoke with a certified credit counselor…

“There was a very helpful lady, I think her name was Sheila. She was so knowledgeable and so very helpful. She really was good. She tells it like it is. She knew Consolidated Credit could help and she just spelled it out step-by-step.‘’

“Sheila had a sympathy for the problem and an understanding of how to address it. I was won over almost immediately. She emailed me the paperwork and Consolidated Credit basically took it from there.”

“After speaking with Sheila and signing on to the debt management program I was greatly relieved.” 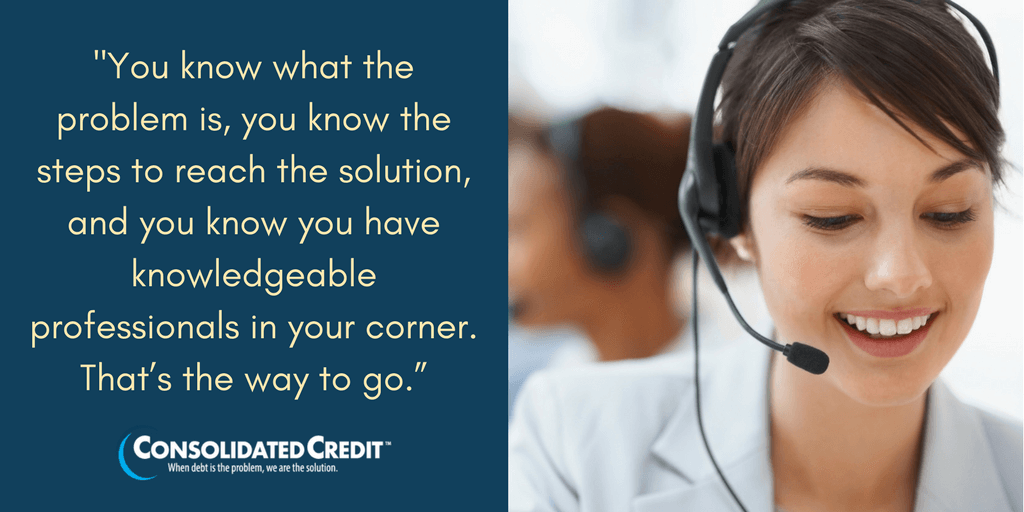 As Sheila explained, instead of juggling multiple payments from multiple creditors, Ronnie would make one payment to Consolidated Credit. They paid his creditors off according to the negotiated repayment schedule. Ronnie could use Consolidated Credit’s online client portal to track the progress as his balances went down.

Creditors are often more willing to negotiate and agree to an adjusted repayment schedule when you go through credit counseling. Working with a credit counselor shows creditors that you’re serious about paying off your debt.

“When I negotiated on my own one creditor would only gone down to 15%, but Consolidated was able to get 5 or 6%. It was half of what they were willing to do for me alone. So, I ended up paying one quarter of the original interest rate.”

Consolidated Credit contacted each creditor to negotiate lower rates and an adjusted payment schedule. More of Ronnie’s creditors agreed to drop their rate to zero. The credit counseling team helped Ronnie set up a repayment plan. 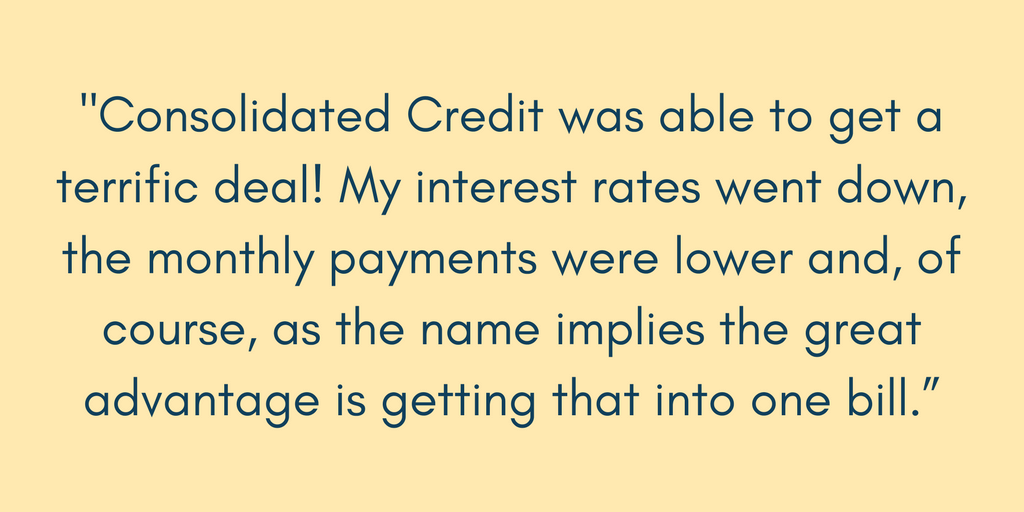 “It was immediately a relief. That was proven more and more as the months passed and I could see the balances shrinking.”

The benefits of Debt Management Program were worth costs…

Ronnie says the fee that he paid Consolidated Credit to set up the debt management program and negotiated on his behalf was nothing compared the interest cost savings.

“Of course there were costs to enrolling in the debt management program; we knew that. But the costs would be far less than going on the way we were, so I didn’t hesitate to go with Consolidated Credit once I talked to Sheila.”

View Transcript
We got a great question from Phyllis in Secaucus, New Jersey. She was wondering what our fees were for a debt management program, and we get this question a lot.Fees vary state by state, as well as the person’s budget, the number of credit cards they have, and the amount of debt they have. The fee amounts can run anywhere from $0 to $69 a month.The setup fee should be the same amount as your monthly fee, and the fee is incorporated into your monthly payment generally, on most debt management plans. And most credit counseling agencies are pretty standard across the board.

The program was flexible when Ronnie’s family needed it…

As Sheila explained to Ronnie, a debt management program is an assisted debt repayment plan that you enroll in voluntarily. Unlike bankruptcy, there is no requirement to include all your accounts; however, it’s usually advised.

You can add cards to the program after you’re already on it. You just need to be careful about why that card wasn’t put on the program when you first started.

If something unfortunate happens after the fact, you can add it to the program.

“As we paid off some cards, we even added a few more in the program. We started with about four and then we added two more that were my wife’s. So overall we eliminated close to $50,000 of credit card debt.”

Ronnie sings the praises of the debt management program and recommends it to anyone who’s inundated with credit card debt.

“I can tell anyone that it can be done because I have done it with the help of Consolidated Credit. As I like to say the ‘proof is in the doing’ and that’s what we did.”

Along the way, credit counseling taught Ronnie how to stop using credit cards…

During a client’s enrollment in a debt management program, they can access a range of free credit counseling resources. Ronnie took advantage and found better ways to manage their household finances. He learned how to budget to avoid debt and how to save effectively to cover unexpected expenses and life events.

“We’re not to get in that kind of shape again. You know, you have to say ultimately the credit card company is not your friend. They don’t care how much of a balance you carry, they almost rather you would max it out.” 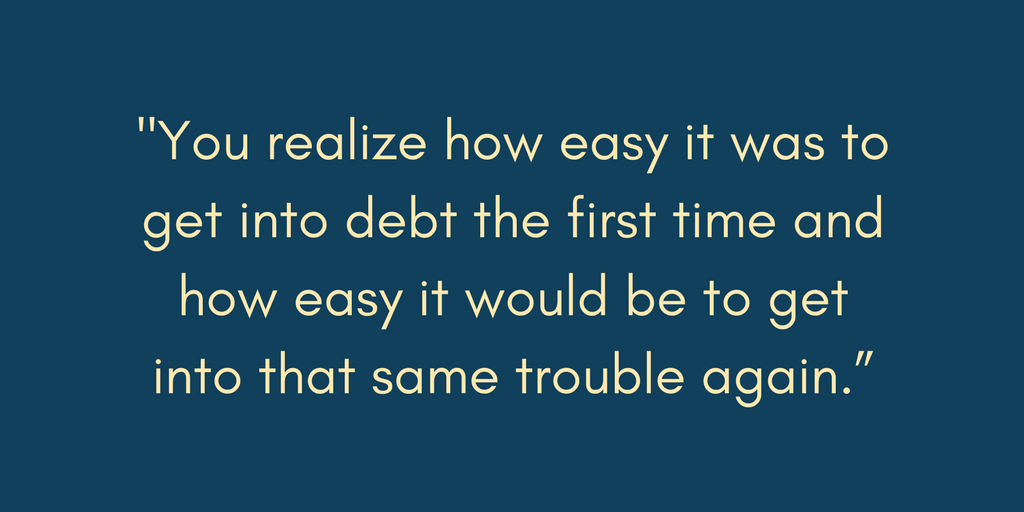 “We basically have no credit cards now. We learned how to stop using credit cards and stay away from them. There are things that we want that we just don’t buy until we have money saved up. We simply refuse to get into that kind of mess again.”

Ronnie says cash is king now in his household. They only use physical cash or debit,

After an initial drop, Ronnie’s credit score is better now…

Another major concern that people have when they go through credit counseling is the potential credit score impact. In most cases, completing the program successfully leads to an improvement, rather than further damage. Ronnie confirms this as his experience.

“Initially, my score went down a little bit – not as much as I feared – but it probably dropped as low as 670. I’m not sure whether that initial drop was directly related to enrolling in the program or not. But it’s back up to around 730, which is about where it was when I first detected the problem with my debt.”

Ronnie has some final advice for anyone who’s reluctant

“By all means call Consolidated Credit. Go online, call, do whatever you have to do. It will be one of the best things you’ve ever done. The call is very much worth it. You will first realize the extent of the problem, but you will immediately see a way out of it and that’s the important thing.