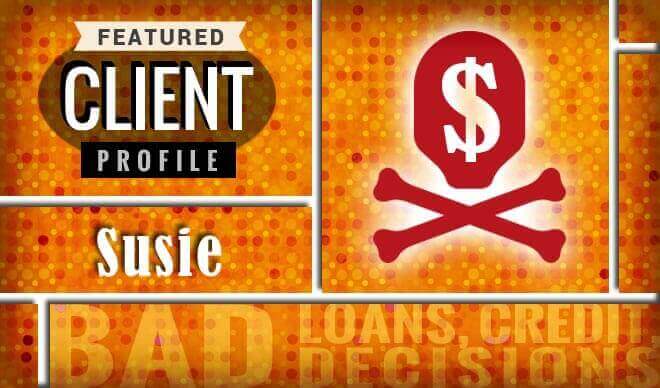 As Susie’s life flashed before her eyes, all she could see were the bills.

When you face problems with debt, it can consume your thoughts and distract you from everything else – your family, work, and – if you’re like Susie – even remembering to put your car in park on a hill.

Coming home from work one day, Susie pulled into the driveway of her South Georgia home. She got out and went to fetch some groceries out of the back seat, then leaned back in to grab the keys out of the ignition. One problem… She’s never actually put the car in park and it started to roll backwards down her driveway.

“I couldn’t believe what was happening. The driver’s side door caught my right leg and tore the muscles and ligaments. But thankfully I finally fell out and rolled down the driveway. I cut and bruised myself but it could have been much worse if I hadn’t gotten loose.”

Susie’s mind was so centered on her debt problems that in that moment instead of her life flashing before her eyes, she was thinking about bills this accident was going to cause.

“I wasn’t even in pain or worried about how badly I was hurt. All I could think was, ‘Please God, don’t let my car hit my neighbor’s house across the street because I’d never be able to pay for that.’”

Luckily the car stopped short of causing any damage, but Susie was actually in pretty bad shape herself. She ended up with more bills to pay to cover multiple doctor visits and a trip to the orthopedic surgeon to drain the blood and fluid in her leg.

How all of this started…

Susie’s challenges with debt had really started about five years prior to the accident, just as she graduated from nursing school in Georgia.

“I’d taken out a personal loan for $45,000 because I was involved with a service-cancelable loan for the adult nursing school program I completed. The company gave me money, but I was obligated to work for THEM once I graduated. But I decided to work for a pediatric facility because it was what I loved. So I owed them the money.”

She and her husband who she’d dated during the last three years of her nursing program got married just after Susie’s graduation. Susie had a young son from a previous relationship, and soon she was pregnant with the couple’s first child – a daughter. But complications during the pregnancy meant Susie had to quit working altogether.

They only solution Susie and her husband saw to get by was to turn to credit. They started using three different credit cards to cover groceries and then gas, along with diapers and baby formula after their daughter was born.

Their home-life turned into chaos…

As it often does, the stress over money turned into stress that the whole family felt.

“We were charging nearly $650 every month to cover our bills. We cancelled our cable service and home phone but it still wasn’t enough. We had two screaming kids and so much debt.”

The situation was getting critical, so the family had to take drastic steps. Susie was able to go back to work, but faced a long commute to get all the way to Atlanta, so transportation costs ate up a sizeable portion of her paychecks.

“We tried to sell our house, but we couldn’t get enough for it. We had to rent it and move in with my parents.”

It’s a similar situation to what many families faced in that year. It was 2009, just following the real estate market crash. Families were already living paycheck to paycheck, and then the bottom fell out. Selling for a profit became almost impossible, which left millions stuck in the same circumstance that Susie’s family faced.

“My company offered an Employee Assistance Program for employees who were facing financial distress. I was nervous and upset, but the call was confidential so I figured it couldn’t hurt. The coach I talked to put me in contact with Consolidated Credit and I spoke to Brian.”

Brian, a certified credit counselor, started working with Susie and her husband. They started by evaluating their debt load, budget and credit to get a full picture of where the family really stood. The family’s debts were eligible for consolidation through a debt management program.

“Brian went over the terms of the program with us. My biggest fear was ruining my credit. Even with all of our problems we’d managed to never default. We always made payments but they were the minimums and the balances kept rising because of the interest. But Brian assured me my credit wouldn’t be brought down by enrolling as long as we stuck with it.”

Susie and her husband decided to enroll. They began making one monthly payment. And Brian was true to his word – their credit was never put in jeopardy. Even when they had a hiccup, Brian was able to keep them on track.

“One day my car broke down for good and we had to get a loan for a used card. I called Brian in a panic about how we’d afford everything and if we could even get a loan. He assured me we’d qualify and sent the appropriate letters to the bank stating that we were in the program and making timely payments. We got the loan!”

Things got better and better…

Two years into their debt management program, Susie and her husband were able buy a new home. Once again, Brian and Consolidated Credit helped them reach their goal.

“Brian contacted the lender and sent the appropriate information in for us again. We bought the new home and continued to rent out the old home.”

Then, four years after entering the program, Susie and her husband made their last program payment and were officially out of debt.

“The program forced us to live in a more financially responsible way.”