Judith D. – Battered but Not Beaten 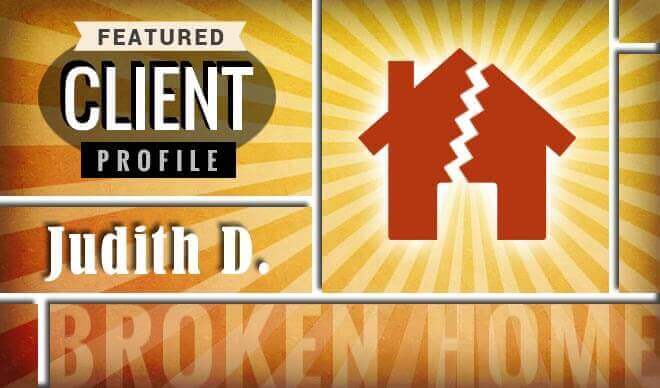 An abused wife flees her husband and confronts her debts – and lives happily ever after.

One in every four women will face domestic violence in their lifetime, costing the country $5.8 billion in medical expenses and lost wages. But it will also cost these women, many who will fall deeply into debt. Here’s one woman’s story, complete with happy ending.

For more than 25 years, Judith D. endured beatings from her abusive husband. They lived on a farm in Missouri, and they had no children. She was very much alone.

Over the course of the marriage she tried to leave him several times. Then, finally in 2006 she broke free.

“Every time I tried to run, he’d end up in the garage with a gun,” she recalls. “He’d take away my driver’s license, so I couldn’t leave.”

After one such attempt, she says her husband beat and threatened her with the gun – then demanded she make him breakfast the next morning. When she said she was too weak from the beating to go the chicken coop and fetch some eggs, he headed outside himself – and she fled to a women’s shelter.

But that wasn’t the end. It was just the beginning.

Her husband tracked her down, and she had to relocate to five different shelters to avoid his reach. Along the way, she racked up thousands in debt just to survive. From using the credit cards to fix her car on numerous occasions to charging thousands on her teeth that he had knocked out.

Fast forward to this summer, and Judith is nearly debt free – only one payment away from making her last. She’s also remarried to a wonderful man.

“You know what, freedom is expensive,” Judith says. “But it’s worth it when you see how much your life can improve. It’s just the best thing in the world.”

Here’s how Judith earned her freedom from both the abuse and the ensuing debts.

Before she left her husband, Judith wasn’t in debt.

“I had money when I needed it, but it came with a price,” she says. “I walked out the door with nothing but the clothes on my back and my cell phone. I had to start over from scratch – and the credit cards were the only avenue for me to get things done.”

According to the U.S. Department of Housing and Urban Development, domestic violence is the third leading cause of homelessness among families. Safe Horizon

She walked out of her “beautiful ranch home” and into a women’s shelter. But she wasn’t exactly free yet…

“He eventually found out where the shelter was,” she recalls. “I stayed the whole day in the shelter because he stood all day next to his car, right across from the parking lot waiting for me to come out.

“Two days later, he got into his car and left. One of the girls came and woke me up and said, ‘You have little time to get out of here — you need to go to the next shelter.’ I got in the car, started it up. I had the address, a contact, and next thing I know, I was in another shelter.”

Judith once again had fled with no money, but she had a solid credit score, which meant she qualified for credit cards…

“We had excellent credit,” Judith says of her life with her husband. After she settled into her second women’s shelter, “I went down to our nearest bank, and they offered me a credit card with a $20,000 limit. And guess what? That’s how it started.”

“I had to get the car worked on, and pretty soon, I had spent about $13,000. At that point, I was living paycheck to paycheck. Then I was offered another credit card. I had to have some dental work done because my husband had knocked my teeth out. That was expensive. I ended up $16,000 in debt.”

Judith went from shelter to shelter as her husband tracked her down. Eventually, she left her fifth shelter and moved into an apartment. It was an emotional moment…

“I remember the first night, getting down in that empty duplex on my hands and knees and crying. I didn’t have any material things but I was free. I was free to start over, and I didn’t have to live under that abuse anymore.”

But just as Judith was getting settled…

“My ex-husband was out there trying to find me. So I had to leave everything behind and get out of there.”

Judith started over yet again…

“I had to start banking again. Then what happens? They offered me another credit card! So now I had three credit cards and was using a little bit of each. I had to start all over and, of course, the car decided to break down. I had to use credit to get it fixed.”

“I lost my job a couple times. I tried to keep up with my payments, but it had gotten to the point where I couldn’t even meet the minimum payments. I was drowning in debt and had that feeling there was no way out. I used to go to bed at night frightful – I was just incurring debt.”

Then life took a turn for the better…

“I met a guy, and I started traveling back and forth to see him in a different state. And, of course, the credit cards came in handy for plane tickets. He was also having problems – he had recently gotten divorced. He had taken the debt settlement route, where his debt load was cut in half. He tried to convince me to get on board, but I said, ‘No. I made the charges, I pay the debt.’”

“Be careful when someone offers you debt settlement – cutting down the amount you owe. The debt does not just disappear. It turns into income, and you pay taxes on that money at the end of the year. Debt management is the way to go, not settlement.”

But she was skeptical. Her friends told her, “These credit counseling places make your payments for so long, then they dump you.” She went ahead, anyway.

As a result, her interest rates dropped and her credit score soared…

“Before consolidating my debt, my interest rates were as high as 24 percent. Some went down to as low as zero percent. I started out with a 532 credit score, and now I’m at 776.”

“One day, I took a good look at my account and said, ‘Oh my God! This is really getting paid off nicely.’ I started seeing the light at the end of the tunnel.”

“All the bridge work in my mouth was totally mine now. Now I only have $600 left on American Express. It’s just the best thing in the world.”

She admits she had her doubts…

“There were times when I wanted to drop out of the program. But I kept thinking if I do, my interest rates will go way back up. I’ll be stuck with huge payments again, and I’ll never get them paid off. It’s been a breath of fresh air.”

But she also learned a lot…

“You have to budget and be disciplined. That discipline has allowed me to understand the importance of managing my money. I think twice about things before I buy. We pay cash for stuff, or we just don’t buy it.”

As a survivor of domestic violence, Judith urges women who face the same abuse to get out…

“You can start over. A lot of women don’t leave because they’re scared. A lot of it is financial. But there are good people out there, people who donate things to you. Get down to the shelter, get some help, and they’ll open doors for you. It always works out in the end. I’m out and thankful for a lot of things. Starting over at 50 was hard, but without making this choice, I never would’ve discovered this company and how they could help me. Thank you Consolidated Credit.”

One instance of domestic violence is one too many; the statistics are disturbing.

Women: Domestic violence is the leading cause of injury to women—more than car accidents, muggings, and rapes combined. Domesticviolence.org

Men: One in seven men age 18+ in the U.S. has been the victim of severe physical violence by an intimate partner in his lifetime. The National Domestic Violence Hotline.