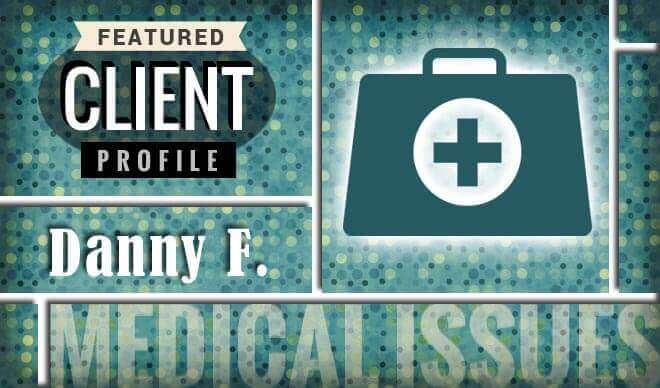 Five years ago, Danny was a car mechanic. One day, he crawled into the trunk of a Jeep Cherokee to make some repairs, and he caught his knees on the bumper. This slip pinched the nerves in his spine, leaving him partially paralyzed.

Since then, Danny has been in a wheelchair and unable to work. He now earns only $800 a month in disability and was forced to move in with his brother. There was no way he could pay off his $2,400 in credit card debt – or so he thought.

“I was making decent money and then I got hurt,” he recalls. “I went down to $800 a month and that put me in a big bind. I was getting behind on my credit cards. One night, I turned on the TV and a Consolidated Credit commercial came on. I got a hold of you guys, and it was taken care of.”

Before losing his job…

“I used my cards for everything – clothes, shoes. I would take out one credit card and then another. Then suddenly I lost my job and went on disability because I couldn’t work. I was stuck wondering, ‘Oh my God, what am I going to do?’”

He struggled to make payments before he called …

“The minimum payments were over $100 a month and that was just the minimum. I had three cards with interest rates as high as 24 percent,” he says.

“I’m happy because the debt is paid off,” he says. “I’m not a deadbeat, I pay my debt. I never considered bankruptcy and it’s all paid off so now I’m debt free”

“I live with my brother because I can’t do a lot of things. He takes care of me when I’m sick and hurt and can’t do anything,” he says. “I was taking a lot from him. Now, I can give the $100 I was paying to you guys while I was enrolled in the program to him.”

Danny is grateful to be debt free, but he won’t celebrate…

“I don’t have enough money to celebrate,” he chuckles. “So I will just sit at home and relax knowing that I owe any money to anyone right now.”

What did the debt management program teach him?

“Enrolling in the program helped me learn not to overextend my credit and not to get too many credit cards. I don’t want that grief ever again.”

“I was the same way and I held out until the last minute. I was getting behind on the payments but I procrastinated enough and then I saw the commercial and finally decided to call.”

Danny was a mechanic making a decent living as he puts it. He never imagined that he would one day lose his job and be bound to a wheelchair for the rest of his life. He’s no longer self-sufficient and is reliant on his brother.

He has this message…

“Don’t over extend yourself,” he says, “because you never know when you will be cut short. You could get hurt or something and suddenly you have nothing.”

Steer your finances in the right direction while you can

Every story has a lesson and Danny’s is no different. Wouldn’t it be empowering if we could look into a crystal ball and catch a glimpse of the future – at least our financial future? Of course, but the reality is you can’t know what’s going to happen down the road. But you have the power to prepare for life’s uncertainties and eventualities while you can.

If you haven’t already, prepare a budget, create an emergency savings fund, save,  spend smartly and pay down debt. If you’re struggling with high-interest credit card debt, endeavor to get out as soon as possible. Whether you’re $5,000 or $50,000 in debt. Take our budget analysis online or dial 1-888-294-3130 to speak with one of our certified credit counselors. We may be able to help you.