Client Profile: Paula understands how debt can drive you crazy 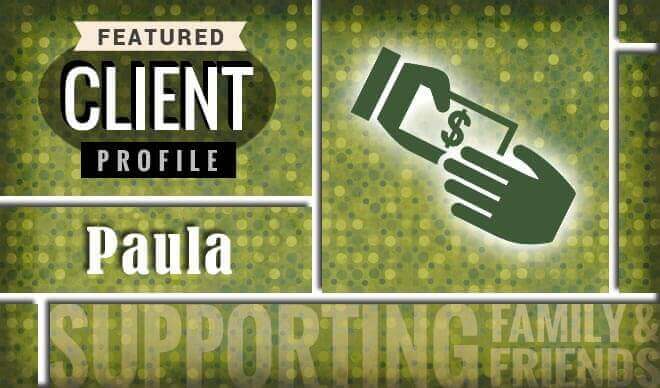 Financial woes caused by credit cards have a way of taking over your thoughts. When your balances are high and minimum payments don’t seem to work, it can drive you crazy. You wonder if you’ll ever pay everything back and how long you can keep juggling your bills. Then you start to lose sleep, you can’t concentrate on work, and your patience with friends and family wears thin.

You need a solution.

That’s exactly the state Paula got into around 2006. Between taking care of her father and keeping the household afloat, Paula felt her financial control slowly slipping away.

“As a mental health counselor I know what it looks like when people suffer emotionally. And when I became consumed with debt, I was there.”

Paula’s challenges started when her father got sick…

In the late 90’s Paula moved back home to Virginia. She needed take care of her father after he got sick and could no longer do everything himself. She also took over all of his financial obligations – taxes, water, cable and all of his other bills.

But despite the fact Paula was the only one there working, her siblings still wanted their share of the home.

“I took out a new mortgage on the house to pay them off and pay some of my credit card bills. But between my bills and my father’s bills and the new mortgage, it became overwhelming. I used my credit cards as a buffer so I could pay the bills on time.”

In 2006, Paula refinanced the house again. She used the money to pay off her credit cards again. However, her budget still wasn’t stable. Paula still relied on credit cards to compensate for a lack of income. As a result, her situation soon deteriorated again.

“I was only making minimum payments on my cards and the interest rates were near 20 percent. My emotional health was in ruin and I was barely hanging on.”

“I was sitting at my computer organizing my bills and it was just too much. I started to cry and I just couldn’t take it anymore. Even though I was trying so hard and I wanted to pay my bills, there was no way I could do it on my own.”

After some research, she called a debt consolidation company…

“The counselor I spoke to was wonderful and he made me feel so much better. I was so scared that I would be ripped off, but he was so patient with me and answered all my questions.”

By the end of the call, Paula felt better because she had a plan in place that really looked like it would work.

The relief was short-lived…

Another debt consolidation company purchased the company that offered Paula her plan. When she tried to contact them the phones were disconnected. Then she checked her bank account and they’d taken out $1,000. However, her creditors never received any payment. It quickly became clear the new company was a ripoff.

Paula was spending her days and nights making phone calls to see if she could get any help. Her stress got even worse when her creditors started to call about her missed payments.

“I was so upset and angry, but I had no one to talk to. The only saving grace was that the counselor who had helped me initially had provided me with his personal cell phone number. I felt bad calling him, but I didn’t have anywhere else to turn. He was the only person I trusted and I knew I could count on him.”

The counselor was not with the company that was supposed to be running her plan. Instead, he’d joined Consolidated Credit’s team of counselors. The counselor remembered the call well…

“She was very emotional because her financial situation was in really bad shape even though she tried to do the right thing. I wasn’t her fault. So I collected her new information and we got her signed up with Consolidated Credit.”

Now Paula has a plan that working with the right payments going to her creditors. The calls from creditors stopped, her credit card balances are heading towards zero, and our counseling team helped her work out a new budget. That way, once Paula gets out of debt, she can stay that way this time.

“It’s been great working with Consolidated Credit and that’s one less thing I have to worry about. I’m still fighting to get my money back from the other debt consolidation company, but at least I don’t have to stress about my debt anymore. That’s a big relief.”