What to Do When Customers Just Aren’t Tipping 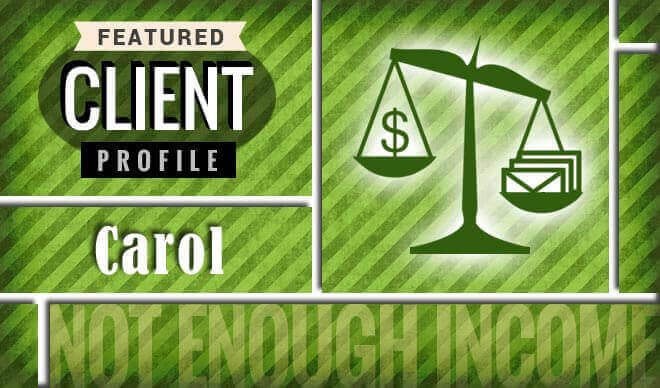 Overcoming challenges with debt in spite of fluctuating income.

Managing money effectively is tough enough with a steady income, but when at least part of your income is variable because you work on tips or commission, it only compounds that difficulty. Whenever there’s an economic slowdown, you can almost expect to see your cash flow dry up because everyone else tightening their belts only makes your financial situation worse. So what can you do?

For Carol, the solution wasn’t easy. She was already working two jobs, clocking over 70 hours every week and still she struggled to make ends meet. By day Carol worked as an office manager, switching gears at night to work as a hotel waitress. But when the economy hit the downturn, it hit residents in Milwaukee where Carol lived and worked particularly hard. No matter how much work Carol put in, the tip money she depended on just wasn’t there.

Money was tight even prior to the downturn…

Carol went into the Great Recession in a similar situation to millions of Americans – she was just getting by before the economy tanked and sent her finances into a tailspin.

“In 2002 I got divorced and it was a struggle to keep up with my bills on my own. Getting the second job helped, but I was still using credit cards to cover everyday expenses. Things were slowly getting out of control and I knew I’d eventually have to find solution, but then the economy started going down the drain and it really impacted my waitressing job more than I ever thought possible.”

Carol went from just getting by to being completely overwhelmed. Her income as a waitress was cut to a third of what she was earning before the downturn. She went from making $30,000 at her night job to making just over $10,000. Families were staying home to eat and when diners did come in they still weren’t throwing down large stacks of cash.

Things only got worse when the owners sold the hotel. After it changed hands, the bottom fell out completely on Carol.

“Our regular clientele didn’t follow us once the new management took over. My tips dropped dramatically and it was even worse than it had been. I started to rely heavily on my credit cards.”

Realizing her situation couldn’t continue as it was, Carol moved the balances from the several credit cards she had open to a new credit card with a 0% introductory interest rate. This can be a viable option for eliminating debt, but only if you stop charging and focus wholly on paying off your debt. Carol wasn’t able to do that and unfortunately that meant that her situation only got worse.

“I should have left the other credit cards alone once I transferred the balances, but I still needed them to cover basic necessities after my waitressing job fell apart.”

By the time the introductory period on the balance transfer credit card ended, Carol still hadn’t come even close to eliminating the balance. Now she had new balances on her other cards and a higher interest rate on her consolidated debt. Instead of getting out of debt, she’d gone farther into debt.

“I contacted a bank representative to see if I could get the interest rates reduced from the 15% that I was paying. They wouldn’t do that, but they offered to combine my credit card debt with my home loan. It seemed like a good deal.”

Essentially, the bank rep moved Carol into a home equity loan. This is where you take out a second mortgage against your home to get money. It’s like a secured version of a debt consolidation loan. The big problem is that it can significantly change your mortgage payments, and if you default you’re now at risk of losing your home. Carol quickly recognized that the “cure” was even worse than the condition she’d faced previously.

“My mortgage payments went up to $2,000 just as my tips from waitressing went down again after the hotel changed hands. I could barely make the payments, but only if I started charging my day-to-day needs on credit cards again.”

Carol finally found her light at the end of the tunnel…

Seeing nowhere else to turn, Carol struggled along like this for five years until she’d amassed almost $40,000 in credit card debt.  She was driving home one day, fighting back tears of frustration when she heard a commercial for Consolidated Credit. Feeling like she had nothing to lose, Carol made the call as soon as she got home.

Her certified credit counselor Adam immediately helped her being laying out a plan that would actually provide the relief Carol so desperately needed.

“Adam got my interest rate cut from 15 percent down to 2 percent, which was a huge help. I also qualified for a Home Affordable Modification Program loan, and that dramatically lowered my mortgage. Then we worked out a new budget. Making the payments and not putting anything on credit was tough at first, but I persevered.”

Carol recently set Adam a personal email to thank him for his help now that she’s almost out of debt. Thanks to the plan she worked out with Adam and Carol’s own hard work and dedication, she should be debt free by July. On behalf of Adam and everyone at Consolidated Credit, we’d like congratulate Carol on doing whatever it took to achieve stability. It’s never an easy journey, but we’re happy we could help you find a path to move forward!