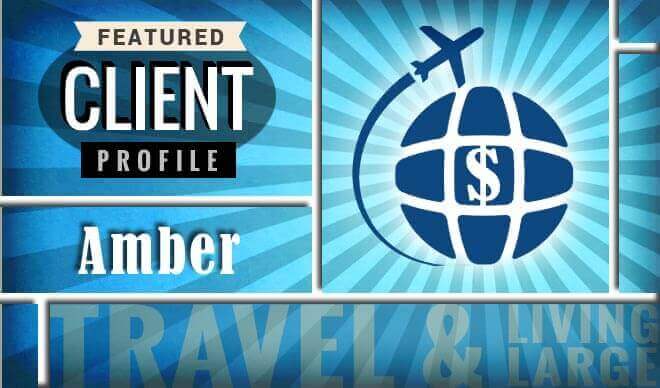 As a senior at Southern Oregon University, Amber pounced on the opportunity of a lifetime – the chance to travel and study abroad in England. It was a school called Winchester University, opened in 1840 in Hampshire.

“I was so excited about this trip,” Amber says. “My dad paid for the airfare as a graduation present, but the rest – tuition, room and board, most of the food and other expenses were covered by me.”

So how did Amber cover those expenses?

“I took out a student loan for around $10,000,” she says. “I made it about halfway through the semester before I had to start using my credit cards to cover my day-to-day living. The problem was, the dollar was only worth about half a pound. That really hurt.”

But Amber stuck it out and traveled beyond England. As a history major, she decided to tour Europe to experience and witness the rich history that she studied about in the United States.

“I travelled to Ireland and Scotland,” she says. “I fell in love with Edinburgh. I even visited the Palace of Versailles in France. My family also visited with me while I was there ? it was an incredible time.”

Once Amber landed back in the states, she decided to move from Oregon back to her home town of Olympia, Washington.

Unfortunately, her financial situation wasn’t in the greatest shape…

“I was saddled with about $60,000 in student loan debt, including the loan I took out for the trip to Europe. And the move back to Olympia cost me almost all of my savings. When I got back home to be near my family, I couldn’t find a job right away, so I started living on my credit cards.”

Amber had three credit cards that she used, and when she eventually found a job after a few months, she was able to start paying stuff off. But things started to snowball on her.

“I transferred the balance on one card to a lower interest rate card, but then started charging on the card that had the zero balance again,” Amber remembers. “I was only making the minimum payments, and some of my other cards had interest rates up to 30 percent.”

Amber finally borrowed money from her father to pay off some of her credit card debt, but that didn’t work out so well.

“I took the money my father loaned me and paid off debt, but then started charging on the cards again for my day-to-day expenses,” Amber says. “I couldn’t pay my father back, and I couldn’t pay back the credit card debt, because by that time the interest was eating up all my money, and I was paying $400 in student loan payments each month.”

Amber was finally in over $7,000 in credit card debt, and she was fed up. She discussed her situation with a friend who told her about Consolidated Credit.

“My friend was previously in debt, and she used Consolidated to get out,” Amber recalls. “She was happy with her experience with Consolidated so I decided enough is enough and I called them.”

Amber enrolled in the Consolidated Credit program in the winter of 2011 and was immediately pleased with the results.

“Consolidated acted like an advocate, and I trusted my counselor from the very beginning. During my debt management program I learned how to budget and stick to the budget, recording every last cent I spent. I couldn’t use credit cards anymore, so I really learned about money management. I made monthly payments of about $280, and I could actually see my debt disappearing. It was wonderful.”

Amber graduated from the program in April 2013 and is now debt free.

“I want to forget about that debt and just move on managing my money in a more responsible manner,” she says. “I have a job working as an administrator in the field of manufacturing, but I also do some marketing and other things. I’m very happy now thanks to Consolidated Credit.”

Amber can forget about her debt, but she’ll always remember the great time she had in Europe.

Have Debt, Will Travel?

A need to travel can take you to the far of reaches of the world, but there may be some serious bills waiting for you when you get home. Whether you got into credit card debt abroad or here at home, we can help you regain control. Call Consolidated Credit today at 1-888-294-3130 or take the first step now with a request for a Free Debt Analysis.